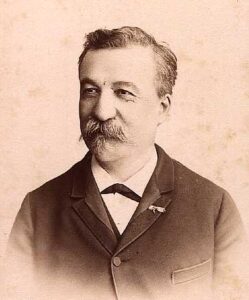 Emile Munier was born in Paris on June 2, 1840 and lived with his family at 66 rue des Fossés, St Marcel. His father, Pierre François Munier, was an upholstery artist at the Manufacture Nationale des Gobelins and his mother, Marie Louise Carpentier, was a polisher in a cashmere cloth mill.

Emile, and his older brother François Joseph (born in 1839), went to the local communal school. By the time their younger brother was born the family’s fortune had improved and Florimond Louis, who was born on September 11, 1851, was enrolled in a boarding school. All three brothers displayed an early gift for drawing and each had produced a pastel self-portrait between the ages of 13 and 14 - Emile’s is dated 1854.

All three children entered the Gobelins, however François stayed and he ended his career as a head-foreman like his father.

Emile Munier attended classes in drawing, painting, anatomy, perspective and chemistry, in relation to wool dyeing in order to become an upholstery artist. Abel Lucas supervised the drawing courses; Mr. Chabale taught the flowers and ornaments classes; chemistry was taught by Mr. Chevreuil and Mr. Decaux was the engineer of Arts et Manufactures.

During this period Emile met Henriette Lucas, Abel Lucas’ daughter, and on August 10, 1861 Emile and Henriette were married in the chapel of the Gobelins. They lived at the Gobelins and Emile, then an upholstery artist at the Manufacture, continued to draw and paint beside his father-in-law. He studied painting, in the Academic tradition with Abel, as well as studying the works of Boucher.

Through the 1860s, Emile Munier received three medals at the Beaux-Arts and in 1869 he exhibited at the Salon. Munier became a great supporter of the Academic ideals and a follower of Bouguereau; whose subject matter was to become a great inspiration to the young Emile.

On August 28, 1867 Henriette gave birth to a son, Emile Henri. Approximately 10 weeks after the birth, having contracted severe rheumatism, Henriette died prematurely on November 9.  In 1871, Emile Munier abandoned his career at the Gobelins and devoted his time solely to painting as well as teaching classes three nights a week.

Sargines Angrand-Campenon, a student of Abel Lucas and a friend of Emile & Henriette, caught Emile’s eye. Sargines was teaching drawing and had acquired a certain reputation as a pastel portraitist - exhibiting at the Salon from 1863 to 1870. The young couple decided to marry and the wedding took place in Paris on January 2, 1872. The couple lived at 8 rue des Beaux-Arts, in a small apartment and a studio, where Corot and Fantin-Latour also had studios.

It was also at this point that Munier entered the studio of William Bouguereau; as evidenced by the fact that in the Salon catalogue for 1872 he is now noted as being a student of not only Lucas, but Bouguereau.  Over the years the two became close friends; Bouguereau even had a nickname for him - la sagesse (wisdom) or le sage Munier (Munier the wise).

In 1873 Munier  painted Le Voleur de Pommes and La Leçon de Tricot (or Special Moment).  On July 1, of that year, Munier received his first visit from George A. Lucas -  an important American art agent living in Paris.  Lucas was an advisor to a number of important American dealers and collectors, including: Samule P. Avery, William T. Walters, Cornelius Vanderbilt, John T. Johnson, and Henry Walters. During the next 12 years a number of Munier's works would be bought by Lucas' clients.

At the beginning of 1874, Munier comleted his work entitled Favourite Kitten (which may be the work purchased by George Lucas on January 17th for 400 fs).  This same year Sargines gave birth to a daughter - Marie Louise - on June 12.  Less than one year later, June 5, 1875, Emile's father, Pierre François, passed away. 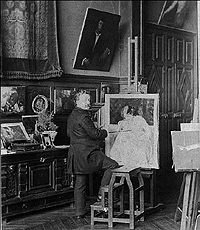 Photo of the artist in his studio

Beginning in 1876, the Muniers spent their summer vacations on the Normandy coast. There, Emile produced numerous drawings as well as some watercolors depicting scenes of boats and fishermen. During the summer of 1879, Emile went to the Ardennes where he produced the portrait of Madame de Chanzy before joining his family, on vacation, in Normandy. It is probably during this trip that he discovered l'Ecole de Nancy and became acquainted with Emile Gallé, with whom he would later collaborate.

Emile’s two children, Henri and Marie Louise, were his principal inspiration at the beginning of the 1880s and he would continue painting sentimental genre paintings featuring them until the end of his life. Marie-Louise is most probably the subject of Naughty boy (1880), L'enfant et le pantin (1880) and La jeune fille et la poupée (1882).

In 1883, the Muniers visited le lac du Bourget (lake of Bourget) where Emile certainly painted La jeune fille au lac and La petite fille aux oranges. During their stay in Aix, Emile frequently attended Italian opera and after returning to Paris, he preserved his growing interest for music and singing.

By the end of 1884 his mother, Marie-Louise Carpentier, was ill and on January 26, 1885 she passed away.  At the Salon of that year Emile exhibited Trois Amis. This painting, representing a chubby girl playing on her bed with a kitten and a dog was an extremely successful work, being reproduced in many forms and used for publicity posters by Pears Soap. With this work, Munier asserted himself as one of ‘the’ painters of young children and their pets. An American collector eventually acquired the painting.

Munier developed an exceptional talent for depicting the short-lived expressions and movements of his subjects. He also became interested in scenes of children in country situations while in Auvergne.  From 1886 onward he would returned to this area, on a regular basis, producing numerous sketches of young peasants among farm animals. Many of these country scenes were the starting point for several drawings and paintings including: Le jeune chasseur (1888), La basse-cour (1889), La paysanne à la fourche (1889), La journée des confitures (1891), La jeune fille et le panier de cerises (1891), and La fillette au tricot - La lettre d'amour.

In 1886, he went back to the subject of cherubs, which he had already worked with three years earlier in Les deux cupidons (1883). His painting L'amour désarmé (Love disarmed), presented to the Salon of 1886, again displays Bouguereau’s influence on Munier and, it is interesting to note that, a number of American collectors had actually attributed this work to Bouguereau.

Among his many American patrons were, Mr. & Mrs. Chapman H. Hyams; important collectors of French contemporary paintings, particularly works from Henner, Bouguereau, Gerôme, Vinel and Schreye. Munier painted their portrait in 1889, and it, along with much of their collection, is now in the New Orleans Museum of Art.

Throughout 1892, Emile Munier painted mythological and religious subjects: several cupids, a goddess with an arm raised, a Virgin Mary praying as well as the famous Mother and child; as well as continuing teaching painting in Paris and attending l'Atelier de peinture de l'Ecole Polytechnique.

On January 3, 1893 Emile's son, Emile Henri, married Marie Marguerite Aumont (born June 30, 1873) - the daughter of Achille and Blanche Aumont.  This same year Emile exhibited L'esprit de la chute d'eau at the Paris Salon, a nude nymph whom is not unlike Naissance de Vénus by Bouguereau, and participated in l'Exposition Internationale in Chicago, where he received a medal.

During the year of 1894, Emile Munier produced a number of works in his well-affirmed style, including one of two cupids entitled Un sauvetage - that was exhibited at the Salon. He also painted a very unusual work Premier prix, in which a dog stands among flowers at a dog show, and during his stay at Mont Dore he produced a number of watercolor that explored the surrounding landscapes and gardens in Auvergne.

In 1895 he painted La jeune fille et le panier de chatons, celebrated his 55th birthday on June 4th and was present at the birth of his grandson, Georges, on June 20. Merely a few days later, he gave his last drawing class and succumbed to congestion cérébrale the next morning. Emile Munier died on Saturday June 29, 1895 at 9 am and was buried at the Montparnasse cemetery.

Our sincere thanks to Mr. Eric Divry, the artist's great, great grandson, who supplied much of the information in this biography.

The text of this page is available for modification and reuse under the terms of the Creative Commons Attribution-Sharealike 3.0 Unported License and the GNU Free Documentation License (unversioned, with no invariant sections, front-cover texts, or back-cover texts).